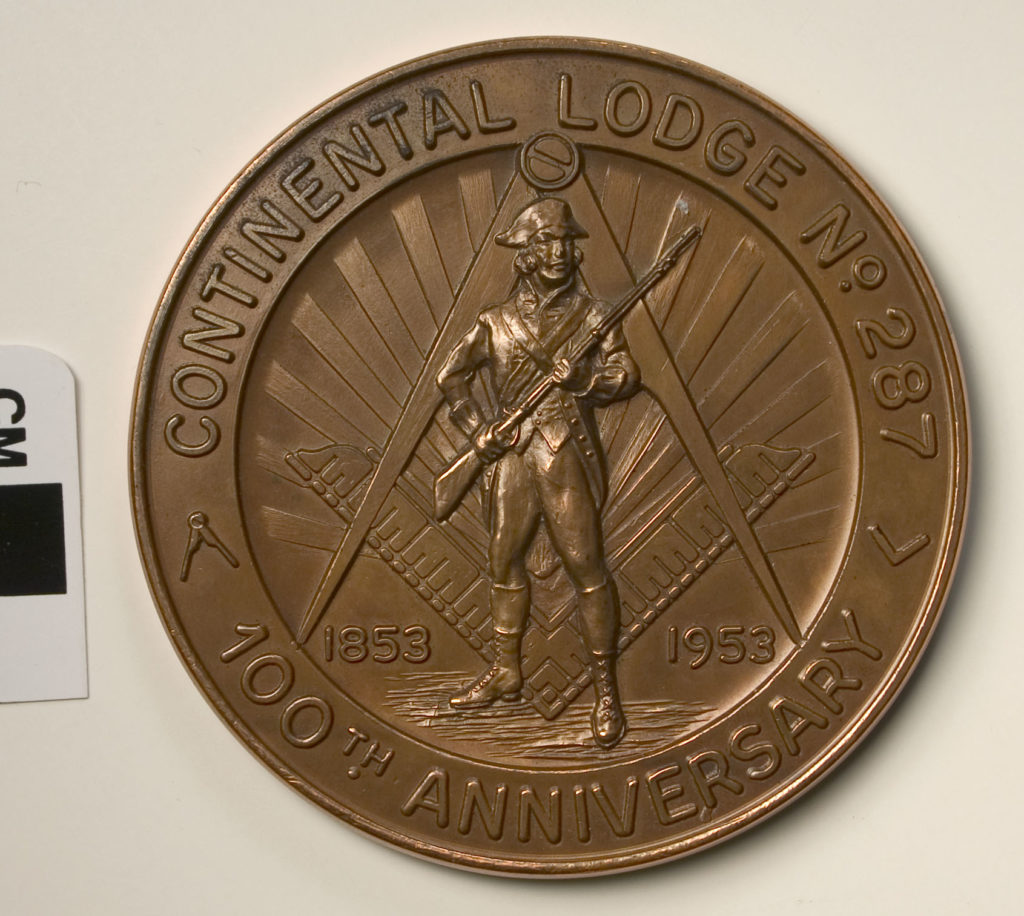 On April 25, 2018, Continental Lodge No. 287 was welcomed by the Livingston Masonic Library in honor of their 165th Anniversary.

A special exhibit was designed and installed in the Reading Room by Ms. Catherine M. Walter, Curator, and Mr. Joseph Patzner, Librarian pro tem, with the help of Ms. Ratirat Osiri, Assistant Curator. The exhibit focused on two prominent members of the Lodge, and also displayed artifacts, books and archives related to Continental Lodge No. 287.  RW Demetrios G. Melis, Library Trustee and Secretary of the Board of Library Trustees, was on hand to welcome the Lodge and present the exhibits.

Three of the artifacts on display, as well as the related biographies, are also found in the Museum’s Online Virtual Museum, graciously hosted by the George Washington Masonic National Memorial. 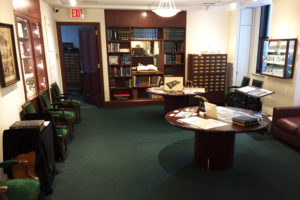 One of the two prominent members was MW Edward M. L. Ehlers, who served as Grand Secretary for 36 years  under the administrations of 22 Grand Masters, from 1881-1917. In 1901, he became the Grand Lodge of New York’s second Honorary Past Grand Master. On permanent display in the Library is the RW Gutzon Borglum bust of MW Ehlers. RW Borglum was the sculptor who created Mount Rushmore. 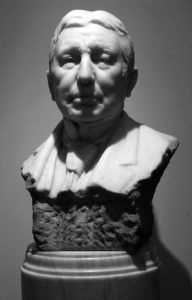 In the temporary exhibit was shown a 1915, illuminated Certificate granting Life Membership to MW Ehlers from Continental Lodge No. 287. 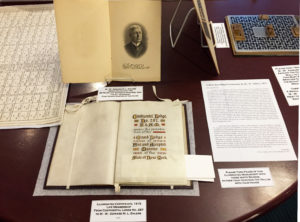 The 1904 Past Master Certificate of W Edward C. Ehlers, the son of Honorary Past Grand Master Ehlers was also on display.

The other member highlighted was RW Charles Looney, who served as Grand Steward from 1908-1909. After his death in 1937, his wife, Mrs. Ida Looney, created the Charles Looney Memorial Collection by donating a number of artifacts he had accumulated, She then actively continued to collect Masonic items, and donated  to the Library, up until her death in 1958, a large amount of medals, bookplates, engravings, letters and memorabilia in RW Looney’s name. The 1906 gold and diamond Past Master Jewel of RW Looney on display holds a lock of RW Looney’s mother’s hair. 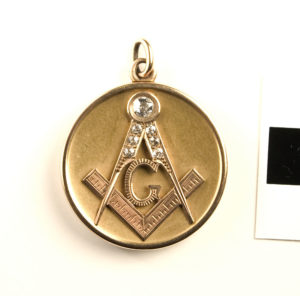 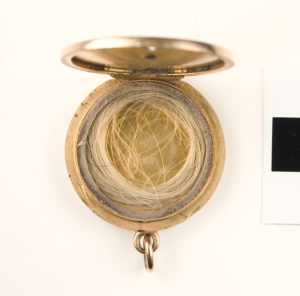 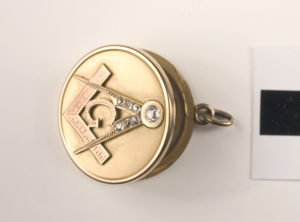 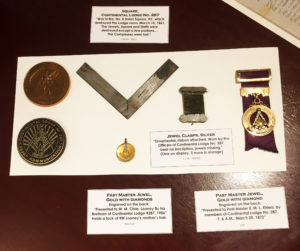 General items related to the history of Continental Lodge No. 287 were featured, including a Jewel Clasp used by Officers of Continental Lodge No. 287, the Lodge Square damaged in the 1861 Union Square fire, and two coin medals: one from 1953 commemorating the 100th Anniversary of the Lodge, and one from 1987, commemorating the 2,500th Communication of the Lodge.

The Lodge Square on display. “The Jewels, Aprons and Staffs were destroyed by the fire except a few portions… the Compasses were lost.” 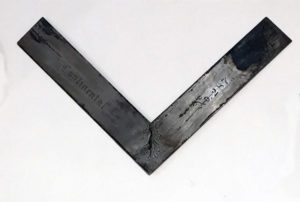 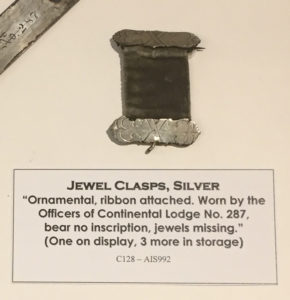 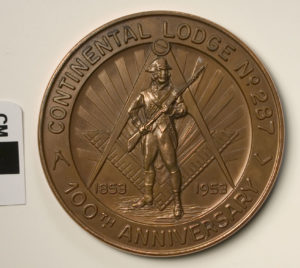 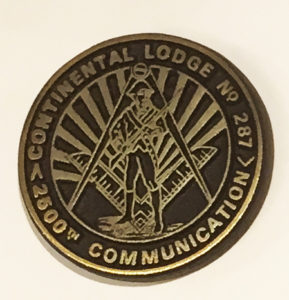 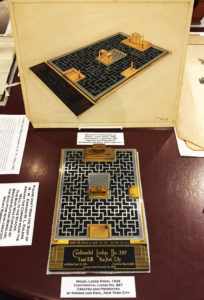 The Grand Lodge’s Masonic Hall Meeting Chart from 1948 showed that the Lodge met in the Craftsmans Lodge Room on the 7th floor on the 1st and 3rd Wednesdays of every month. 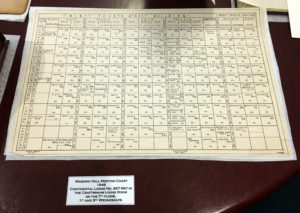 Most Worshipful Jeffrey M. Williamson, Grand Master 2016-2018, was in attendance at the Lodge’s Anniversary event at the Library, accompanied by the Grand Line. In a surprise to the Lodge, MW Williamson unveiled the Bible to the Lodge, and informed them of its historic placement in his Official Portrait. 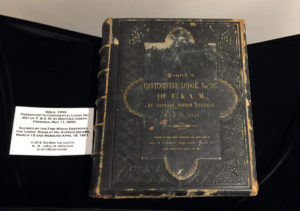 The Library congratulates Continental Lodge No. 287 for its historic milestone, and for its inclusion in the Grand Master’s portrait, and thanks the Lodge for its support.

The Library is thrilled to share the history it holds with the Lodges and with the membership of Grand Lodge. If any Lodge would like a similar special, temporary exhibit installed for a commemorative event, please don’t hesitate to contact us at info@nymasoniclibrary.org.