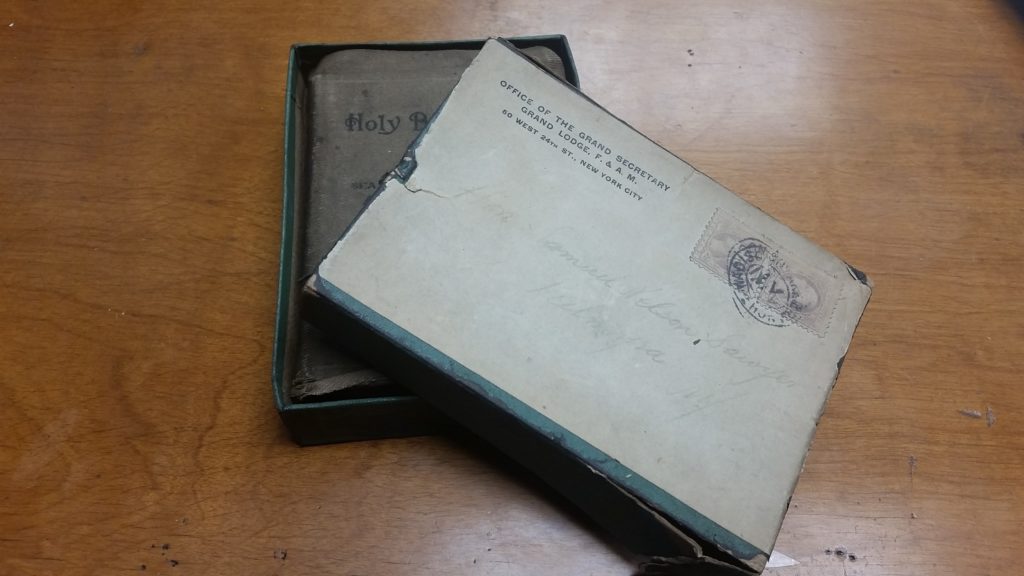 Traditionally, Bibles were held in containers known as “Bible Boxes.” A box such as this would be used to store a Bible, as well as protect it while it was being transported. Popular in the 17th century, boxes were ornate and made out of wood, metal, or even ceramics.

However, as modern forms of mailing and transportation came about, these Bible Boxes became subdued in style, but more pragmatic for modern shipping. The boxes started to look more like what we consider today as a FedEx box.
Let us deconstruct one of our Bibles that is encased in a Bible Box.
Bibles would be sold in these boxes by the publishers, which would often be indicated on the side of the box. This particular Bible was being distributed by the publisher Nelson.
Then, as seen by this example, the top of the box could be pasted over with paper, stamped, and shipped out to another recipient. In our example here, there are two 3 cents stamps on the pasted paper, along with a postmark. The postmark, unfortunately, does not include a date.
However, on this top cover, it faintly reads (in pencil!) that the recipient is “Hon. Samuel Nelson Sawyer,” who was the Grand Master of the Grand Lodge of New York F. & A.M. from 1908-1909. And, the Bible inside the box, which is from Sea & Field Lodge No. 1 F. & A. M., is dated as being from 1918. In the back of the Bible, there is a library due card stamped with dates from 1936. As such, it can be determined that Hon. Samuel Nelson Sawyer received this Bible from between 1918-1936.
Examples like this are reminders that, not only is the object itself important, but so is the case that it came in.
And, don’t forget to visit our new display, Selections from the Bible Collection at the Chancellor Robert R Livingston Library & Museum, that is currently being exhibited in the Library!