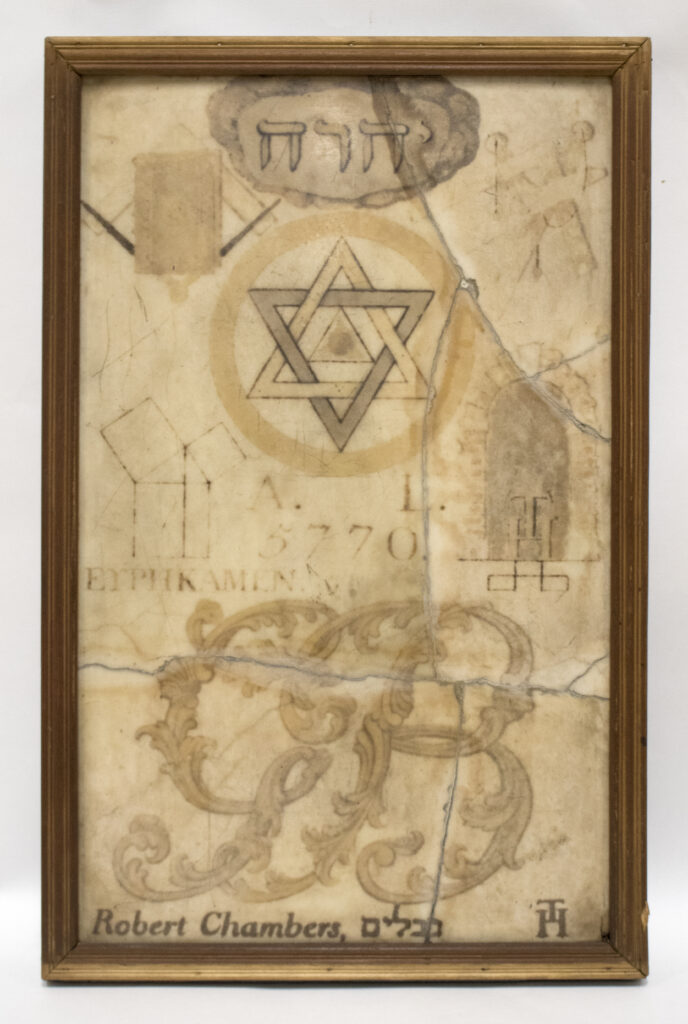 A curious Masonic artifact in our collection was listed in the old collection catalog index made by the Grand Lodge’s Committee of Antiquities in 1905.  It was described as a marble tablet, 20 inches long and 12 inches wide, etched and colored with various Masonic symbols.  It also has an ornate monogram “G. B.”, the name Robert Chambers, and Hebrew letters at the bottom.  Many symbols on the tablet belong to the Royal Arch degree, such as: a small triple tau at the bottom right, the double triangle or the Seal of Solomon, and the Greek word EYPHKAMEN (usually part of the phrase Eyphkamen Cultor Dei Civis Mundi on the Seal of Solomon).

How it became part of the Grand Lodge’s collection was also mentioned, as follows:

This Tablet was in the attic of the house adjoining the Old Sugar House, on Liberty Street, New York City.  It came into the possession of Bro. Isaac H. Gibbs, about the year 1840, and was presented by him to Grand Lodge, about the year 1868.

The Old Sugar House, also known as the Livingston Sugar House, was a five-story tall greystone building erected in 1689, located next to the Middle Dutch Church on Liberty Street.  It was built by the Livingston family and used as a sugar refinery before the Revolutionary War. After the British captured New York City in 1776, it was seized and converted into a prison for detaining American prisoners.

The building was demolished in 1840, the same year Bro. Isaac H. Gibbs had obtained the tablet.  It is possible that it might have been recovered from the attic before the demolition.  The 28 Liberty Street Building (formerly One Chase Manhattan Plaza) now occupies the site where the Old Sugar House once stood.

Regarding the name signed at the bottom of the tablet, it is possible that the marble tablet might be engraved, stained, and signed by Robert Chambers, a recognized operative mason and marble stainer from Gloucestershire, England, who was active from 1750 to 1780.  He was well-known among researchers for leaving Hebrew letters in his crafts.  In this case, the letter he left was “Giblim”, the word equivalent to master masons mentioned in the building of the Temple of Solomon.

However, the origin story of who was the original owner of this tablet, and how it ended up in the attic of the Livingston Sugar House and later in possession of Bro. Isaac H. Gibbs, is still unclear.

Side note: Brother Isaac H. Gibbs was the first Senior Deacon of Manitou Lodge No. 106 in 1845.