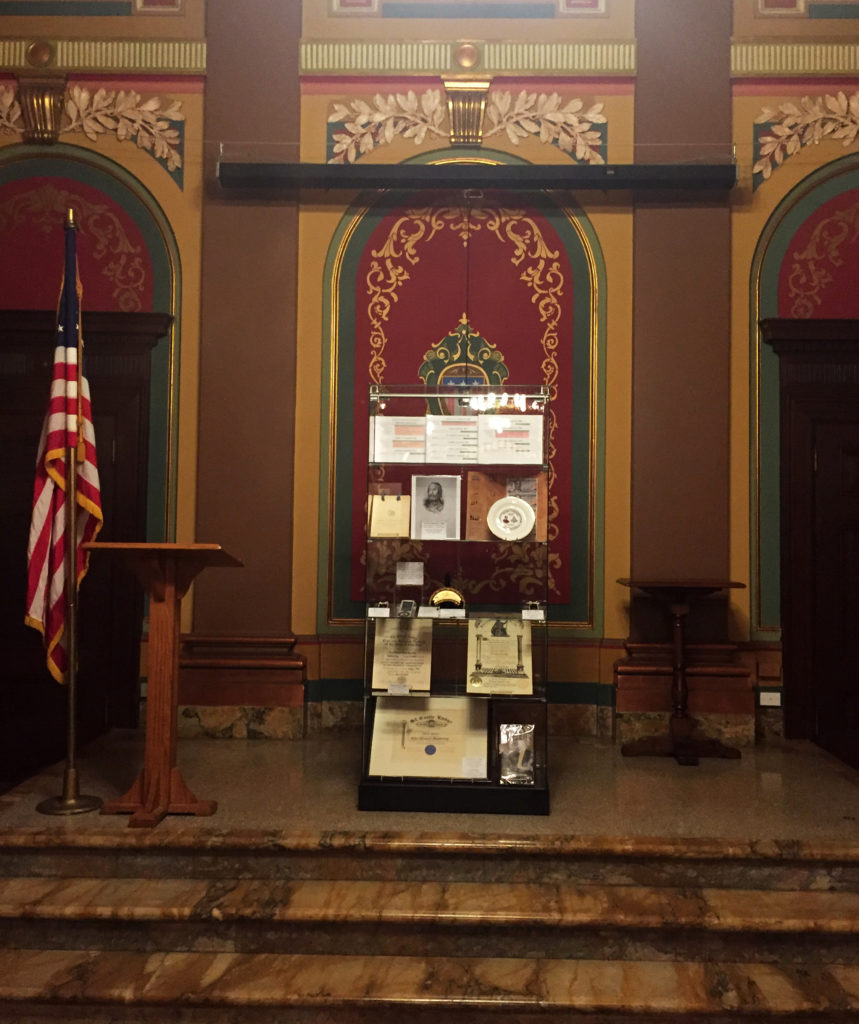 The Fourth Masonic District of Manhattan was originally formed from 22 Lodges of the Sixth and Seventh Districts in the 1918 state-wide reorganization of the Districts of the Grand Lodge of New York. Those 22 Lodges included (to this day) Kane Lodge No. 454, the “Explorers’ Lodge,” and St. Cecile Lodge No. 568, the state’s first daylight “Lodge of the Arts.” This Lodge has special Dispensation to meet during the day, due to its membership which was largely formed of performers who could not meet at night.

Through the work of Ms. Catherine M. Walter, Curator, and Ms. Ratirat Osiri, Assistant Curator, with the assistance of Mr. Joseph Patzner, Librarian, the Livingston Masonic Library and Museum was pleased to present a Temporary Exhibit highlighting some of the fascinating artifacts held in the collections which came from Lodges in the Fourth Manhattan District. The attendees stated that they greatly appreciated the Special Exhibit and extended their grateful thanks to the Library staff for their work illuminating the history of their Lodges and Districts.

The Lodges of the Fourth Manhattan District, their organizational histories and the displayed artifacts are highlighted below.

Kane Lodge No. 454 was warranted on June 9, 1854. On display in the Exhibit was a 1900 Program for a Dinner to Kane Lodge No. 55, New Jersey, by Kane Lodge No. 454, NY. Included in the Program was a signed engraving by Jacques Reich of Elisha Kent Kane. Kane Lodge No. 454 maintains their own Museum at the Grand Lodge of New York which highlights their explorer members who traveled to and discovered the North Pole.

Columbian Lodge No. 484 was warranted on June 15, 1860. On display in the Exhibit was the below Medal commemorating the 50th Anniversary of the Lodge in 1910.

Pyramid Lodge No. 490 was warranted on June 3, 1856 by the revived St. John’s Grand Lodge, and was granted a new warrant from the regular Grand Lodge on June 8, 1860. On display in the Exhibit was the below medal from their 50th Anniversary in 1910.

Park Lodge No. 516 was warranted on June 5, 1862. The first communication of Park Lodge was held at Washington
Hall, 683 Eighth Avenue, on Wednesday evening, July 11, A.L.
5860, under a Dispensation granted by MW John W. Simons, Grand Master.

An early petitioner to Park Lodge was Peter Hart, who distinguished himself as one of the first heroes of the Civil War. Of this Brother, “Leslie’s History of New York” commented: “With Major Anderson at Fort Sumter was Peter Hart, a soldier who had served with him in the Mexican campaigns. Hart was a native New Yorker and had once been a sergeant on the New York Police force. Nine times during the bombardment of Fort Sumter, the Stars and Stripes were pierced by shots from Confederate
batteries. At last a ball struck the staff and down came Old Glory to the dust. Thereupon, Peter Hart climbed to the top and nailed the flag to it while shot and shell were pouring all around him in a hissing shower. It remained in its proud position for two days until the surrender on April 14, 1861. It is worthy to note among the historic memories of the times a New Yorker saved the Stars and Stripes from falling in the first historic battle of the Great Civil War.”
A postcard in the collection which references the Lodge was not placed on display in the Exhibit, but is featured below.

Gramercy Lodge No. 537 was warranted on June 17, 1863. A large coaster which was not placed on display for the Exhibit is featured below.

On February 20th of that year, 1863, Putnam Lodge, No. 338 sponsored
the application of W..George K. Chase and twenty-three other Masons to form a Lodge they named Gramercy (which to the American Indians means “Many Thanks”). Of these petitioners, twenty-one were from York
Lodge, No. 197; one from Oscar Coles Lodge, No. 241; one from Tecumseh Lodge, No. 487 and one from Hiram Lodge, No. 1, of New Haven Conn. They came from diverse walks of life: broker, tailor, lawyer, baker, plumber, brush maker, grocer, hardware and ointment merchants, to name a few…
At the outset, the Lodge developed a close fraternal association with Sagamore Lodge, which presented Gramercy with a trowel.

St. Cecile Lodge No. 568 was warranted on June 28, 1865. It was the first Lodge in New York State to be granted Dispensation to meet during the day, as most of the members were entertainers who worked at night on Broadway. On display in the Exhibit was the below Certificate for Brother Al Jolson. Also on display from the Biography Section of the Library’s Book Collection was the book, Jolson: The Legend Comes to Life, by Herbert G. Goldman [Call Number in the Library: 921 J68g].

Britannia Lodge No. 1166 was warranted on May 6, 1964. On display in the exhibit was the below Certificate of attendance during the Lodge’s 25th Anniversary celebration. It was presented to MW Wendell K. Walker, Honorary Past Grand Master (awarded in 1979) and Past Grand Secretary from 1963-1990, serving for 27 years during the terms of 15 Grand Masters. He passed away in 1991, during MW Richard P. Thomas’ term. MW Walker was an avid supporter of the Livingston Masonic Library.

Jose Rizal Lodge No. 1122 was  warranted on May 16th, 1984. On display in the exhibit was the below plate, celebrating the Lodge’s 25th Anniversary in 2010 and issued during the term of W.. Arvin P. Repil. a Brother in good standing for the past 37 years.

Also on display, to highlight the Mason after whom Jose Rizal Lodge was named, was the below commemorative folder of currency, issued in the Philippines with a Masonic Square and Compasses prominently displayed. The first-named Hero in the Struggle for independence was Brother Jose Rizal, a member of Logia Solidaridad No. 53.

It was a great pleasure for the Library’s Museum Division to share some of the magnificent artifacts in the Collection with the Brethren for whom the items have most meaning. Please don’t hesitate to contact the Library if your Lodge or District would like to have a similar Special Exhibit.