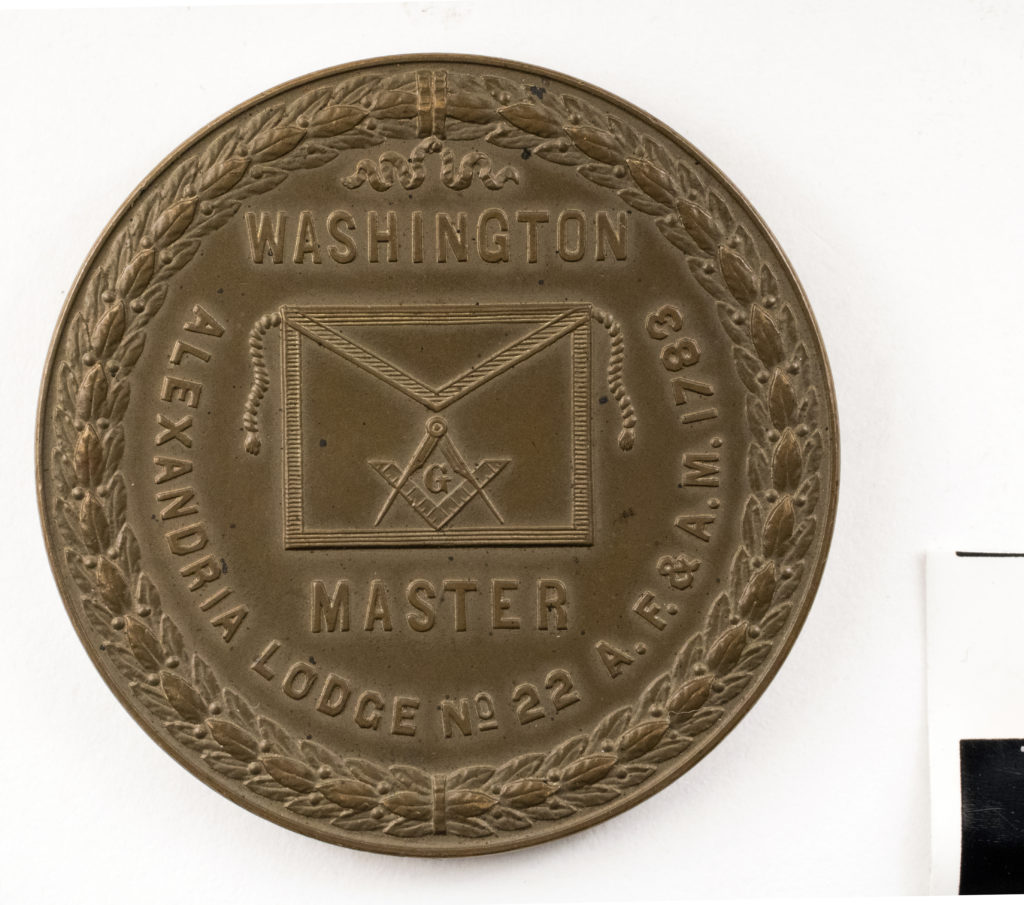 Among the 60,000 artifacts in our care, we have a fascinating coin and medal collection which reflects both rich Masonic history as well as the history of the world. As I have been cataloging and studying them, I am excited to share with everyone some of the collection’s highlights that I have come across .

The Masonic Medal issued by the United States Congress

To commemorate the centennial of the death of George Washington in 1899, the United States Congress issued four commemorative medals to fund The Washington Monument Association in 1902.1 The collection feature George Washington’s profile based on Jean-Antoine Houdon’s works on the obverse with four reverse variants; Surveyor variant, Firemen variant, Husbandry variant and Masonic variant, which was suggested by a committee appointed by lodges in Alexandria. 2 They were pressed in later in 1904 in Philadelphia and were distributed for $1 each in bronze (and $1.5 in silver) 2

The four medals reflected his life and time as a citizen in Virginia where he spent his career as a surveyor, a fireman and a farmer, and served as the Master of the Lodge.3 The reverse of the Masonic variant displays a Masonic apron with a square and compasses and the inscription of Alexandria Lodge No. 22 of Virginia, the Lodge in which George Washington served as Master in 1788.

This medal is one of the only Masonic medals ever issued by the US Congress. The creation of this medal could also suggest that George Washington’s strong connection with the Freemasons was still widely acknowledged back in that time.4

The Ciphered Masonic Medal of the Netherlands

This medal was struck in 1825 at The Hague by the Grand Lodge of the Netherlands to commemorate the marriage of the Grand Master of Masons in the Netherlands, Prince Frederick of the Netherlands, to Princess Louise of Prussia. The medal was designed by Joseph-Pierre Braemt, a famous Belgian medalist & engraver. The obverse presents the female figure referred to as Latomia with ciphered lettering above translated as “Ornat Et Auget”5 which possibly means “Elegantly Increase in Wealth and Fertility” as a blessing to the royal couple.

The reverse displays an radiated delta with the letter G , with ciphered inscription around which can be translated to “In Memoriam Augustissimarum Nuptiarum Fratum Libere Ac Fidelis Silenti Lege Operantium Florentissima In Belgio Societas.”5 It could be roughly translated in English as “The most flourishing Society in Belgium of Brethren working freely under the law of faithful silence to commemorate the majestic wedding.”5

On a side note, after the Napoleonic Wars in 1815, Belgium was annexed into the Kingdom of Netherlands, and so were the Belgian Lodges.6 It could possibly be that the Belgian Brethren, who were under The Grand Lodge of The Netherlands at that time, were the ones who issued this medal, which would explain why Belgium was mentioned on its inscription.

The five Sols copper token was commissioned by Monneron brothers of Paris (Monneron Frères) as “necessity money” in 1792 during the economy recession due to the French Revolution. The obverse displays the adaptation of “Fête de la Fédération” (The Festival of Federation) of July 14th, designed by Augustin Dupré, and depicting the soldiers saluting the female figure which represents Liberty.7 The inscription says “Vivre Libre ou Mourir”, which means, “Live free or die.”

The Monneron brothers commissioned Matthew Boulton of Soho Mint in Birmingham, England, to make the token. The token was made of copper, using a steam engine coin press and it was considered one of the highest-quality tokens ever produced. However, the token barely lasted a year before it was forbidden by the French government later in 1793 and slowly ceased circulation.8 (On a side note, the term ‘coin’ only applies to government-issued money, while currency issued by a non-governmental entity is instead named a token.)9

The Stonewall Jackson medal was the medal issued by the Confederates to commemorate the death of Thomas ‘Stonewall’ Jackson, the famous Confederate General of the Stonewall Brigade. This medal is claimed to have different origins from various sources: some claim it was commissioned by a grandson of the Marquis de Lafayette of the Revolutionary War10; some claim it was Charles Lamar, a Georgian businessman and Confederate Colonel who commissioned it.11

There is also a claim that the medal is the only medal issued by the Confederate States12, although there is no official record of it anywhere. The most likely claim is that, shortly after his death, the medal was made by fundraising through subscription, along with the funding of his statue.13

The medal was designed by Armand Caque, a French medalist. The finished medals were shipped from France and arrived at the very end of the Civil War. The other shipment was purchased in Paris by Charles Lamar during a business trip in Europe, hence the assumption that he was to one who commissioned it.13

The shipment made it through the Union’s blockade to Georgia, but then Lamar rejoined the army and was killed in action before he could distribute them. The medals were kept away in the Lamar family’s warehouse for almost thirty years before they were recovered again, making headlines in newspapers.14 They were later sold for $1 each through The Lady’s Auxiliary to aid disabled Confederate veterans, as advertised in 1894 in the Civil War Veteran magazine.13

The obverse of the medal shows the bust of Stonewall Jackson, facing left. The reverse shows the list of Civil War battles in which he participated. Though it was one of the most significant items associated with the Confederate, it is criticized for a number of inaccuracies on the medal such as mistakes in the list of his battles13, the wrong year of his birth and the poor likeliness of his portrait that has more resemblance to Abraham Lincoln than to Stonewall Jackson.14

2. Brownell, J. H. “Monument to Washington, as a Citizen in His Home Town.” The American Tyler, edited by Arthur M. Smith, The Tyler Publishing Co., 1904.

6. Brennan, J. Fletcher, translator.  A General History of Freemasonry : Based Upon the Ancient Documents Relating to, and the Monuments Erected by, This Fraternity, From Its Foundation, In the Year 715 B.C., To the Present Time, by Emmanuel Rebold, Cincinnati : American Masonic Publishing Association, 1872, pp. 119–120.