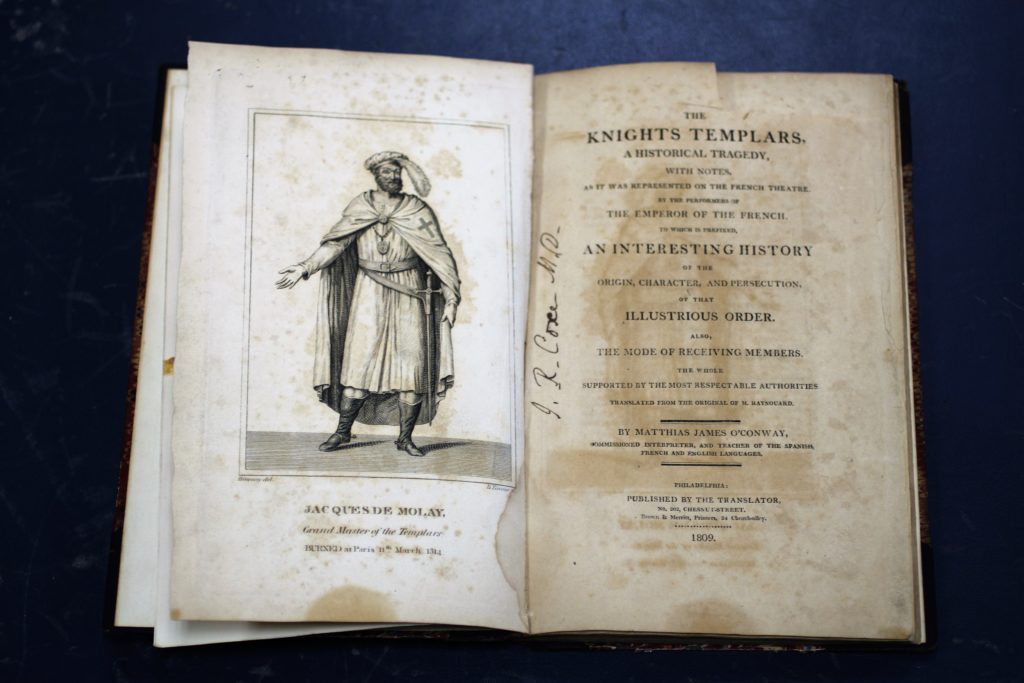 Featured Book from The Library Division

THE | KNIGHTS TEMPLARS, | A HISTORICAL TRAGEDY,| WITH NOTES, | AS IT WAS REPRESENTED ON THE FRENCH THEATRE, | BY THE PERFORMERS OF | THE EMPEROR OF THE FRENCH. | TO WHICH IS PREFIXED, | AN INTERESTING HISTORY | OF THE | ORIGIN, CHARACTER, AND PERSECUTION, | OF THAT | ILLUSTRIOUS ORDER.| ALSO, | THE MODE OF RECEIVING MEMBERS. | THE WHOLE | SUPPORTED BY THE MOST RESPECTFUL AUTHORITIES. | TRANSLATED FROM THE ORIGINAL OF M. RAYNOUARD.

“This Religious and Military Order, whose virtue and prowess emblazon the historical page, and the memory of whose unmerited persecution will evoke the tribute of a sign from every generous breast, originated in Jerusalem, A.D. 1118.”

In honor of the upcoming Grand Encampment at Grand Lodge, the Livingston Library delves into the history of a seminal work essential to the Order of the Knights Templar’s literary history. nouard’s play, Les Templiers (1805), was among the first modern literary portrayals of the Order of the Knights Templar. Raynouard was a political radical, having been imprisoned for his support of the Girondists political party in France during the time of the Revolution. The Girondists advocated the end of monarchy but feared the chaos spawned by the Revolution, and rightly so. Though Raynouard was only imprisoned, there were mass executions of those affiliated with the Girondists during the Reign of Terror.

Napoleon’s battlefield victories brought spoils to France from around the world. It was during his conquest of Italy that papers from the Vatican Archives were retrieved. Raynouard spent years studying these works, eventually writing a historical piece called Monuments Historiques Relatifs a la Condemnation des Chevaliers du Temple [Historical Documents related to the Condemnation of the Knights Templar]. Most notably, he found no conclusive evidence regarding secret Gnostic doctrines or mystical practices. Inspired by his historical work, he wrote Les Templiers to be performed for the Emperor himself.

It was Raynouard’s play that perpetuated one of the many false claims associated with the Knights Templar. Having confused the Mongol general Mulay with Grand Master Jacques de Molay, Raynouard claimed Grand Master Molay led the Mongols in their attack, capturing Jerusalem and the imaginations of many. At the height of the confusion in 1846, a large painting was created by Claude Jacquand, titled Molay Prend Jerusalem, 1299 (“Molay Takes Jerusalem, 1299”), which portrays the moment of capture. Today the painting hangs in the Hall of the Crusades in Versaill 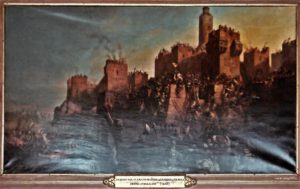 Raynouard’s playwright career came to an abrupt halt when his play Les Etats de Blois (1810) offended Napoleon due to themes related to freedom of speech. He became a well-respected linguist and died near Paris, France in 1836.

The library holds two copies of the English translation of Raynouard’s Les Templiers. Published in 1809 by the translator Matthias James O’Conway in Philadelphia, this edition includes both An Interesting History of the Knights Templars and the play itself, entitled The Knights Templars, a historical Tragedy. The frontispiece of the book of Jacques de Molay was engraved by Benjamin Tanner, an engraver of Philadelphia, just four years after he moved to Philadelphia from New York City. The copy featured was presented to the Grand Lodge of New York by the Brooklyn Masonic Veterans in 1933. It has a number of ownership signatures, including a manuscript notation that was at some point cut out of the book.

The Livingston Library will be open on Saturday during the Great Encampment! Come check out our special Knights Templar displays!