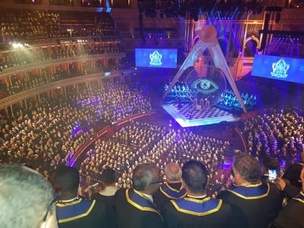 This year, Freemasonry as it exists today arrived at its 300th Anniversary. On June 24th, 1717, four London Lodges met to create the first Grand Lodge. Long before that, Masonic Lodges had existed, but mostly operated independently from each other. The new Grand Lodge in England provided Freemasonry with a structure, common rules, visitation rights and a modern philosophy: the Enlightenment. It was the beginnings of modern Civil Society.

Freemasonry introduced several revolutionary concepts for their time and place: men were assessed by their merits, and not by their wealth or social status. Lodge leadership was elected — not hereditary. Members observed religious tolerance. Such ideas had a strong impact in the development of modern Western thought, as well as in the history of many countries in Europe and the Americas.

The study of the History of Freemasonry has become an academic topic of interest. CEHME  – Centro de Estudios Históricos de la Masonería Española (a European academic organization) holds an international meeting every three years. The last one was in Gijon, Spain, and the next will be held in Lisbon, Portugal. REHMLAC – Revista de Estudios Históricos de la Masonería Latinoamericana y Caribeña (a sister Latin American academic organization) also holds similar meetings. The last one was held in the University of Havana, Cuba. In the United States, the University of California, Los Angeles (UCLA) has also held such seminars in 2011 and 2012, among other academic institutions. Many PhD dissertations are being submitted in the United States, Europe and Latin America, relating relevant national events with the development of Masonic Organizations.

He is also a member of the Ancient Accepted Scottish Rite, NMJ.

He serves as a Mechanical and Aerospace Engineering Research Professor at the L.C. Smith College of Engineering & Computer Science at Syracuse University. His expertise is in statistics and operations research modeling and analysis;  Quality, reliability, SPC/DOE, and industrial statistics; International education, and engineering education research.

Brother Romeu is the Director of an international educational project dedicated to providing programs that enhance faculty development opportunities and exchanges called The Juarez Lincoln Marti Project. He is a member of the Fulbright Speakers Specialist Roster, through which he has taught courses in several universities, such as Veracruzana, Mexico, Catolica, in the Dominican Republic, and Instituto Politecnico, Ecuador. Such courses and workshops are subsidized by the Fulbright organization