When I received a phone call in December from Worshipful Brother William Hubschman about a donation he wanted to make to the Grand Lodge Museum here at the Livingston Masonic Library, I was most intrigued by the mention of a mirror, as we have very few in the collection. The donation came in mid-January, and I was quite pleased with the mirror – it is a 1917 hand-held 50th Anniversary commemorative mirror for Emanuel Lodge No. 654, which was warranted in 1867. (In 1996, Emanuel Lodge No. 654 merged with Daniel Carpenter Lodge No. 588, to be known as Carpenter-Emanuel Lodge No. 588 of the Fifth Manhattan District.) Along with the mirror were some coins, some lapel pins and a Lodge By-laws. 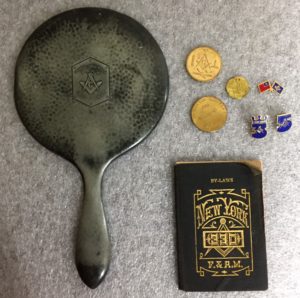 Well, then I opened the By-Laws and was stunned!  Written into the front was the name of the original owner: Walter M. Fleming, one of the co-founders of the Ancient Arabic Order of the Nobles of the Mystic Shrine! 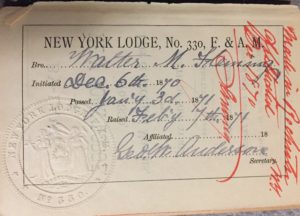 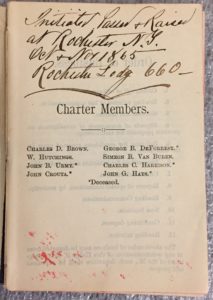 According to these Bylaws just donated, however, the dates of his Raising and his Affiliation are different than those Denslow reports … a mystery to be researched some other day. Denslow’s entry states that Brother Fleming was also a member of Columbian Commandery No. 1, Knights Templar, and served as its Commander from 1873-1877.

I called Worshipful Hubschman to tell him to whom the Bylaws belonged and to be certain that he did, indeed, mean to donate them to us, once he knew of their famous owner. He was surprised as well, but assured me that he was happy the booklet had found a safe home. I assured him of our gratitude for adding to the collections of the Livingston Masonic Library and Museum, helping to maintain it as one of the finest Masonic research centers in the world.

Brother Hubschman is 86 years-old, and is a 52-Year member. He’s a Past Master of Habonim Lodge No. 1042 and a member of South Bay Lodge and Spartan Lodge No. 956 as well as a part of the Scottish Rite on Long Island.

His nephew, Harold Hubschman, a member of Fulton Lodge No. 216 in Atlanda, GA, inherited numerous items from his father, Worshipful Albert Hubschman (Habonim Lodge No. 1042) and Right Worshipful Jacques Fiensod (Carpenter-Emanuel Lodge No. 588 and District Deputy Grand Master of the Fifth Manhattan District). Upon Brother Harold’s death, his wife sent Brother William Hubschman numerous Masonic items, some of which he has donated to the Grand Lodge of New York.

We are thrilled to add these items to our collection, and plan on displaying the Bylaws in a new exhibit being planned for the Annual Communication in May!