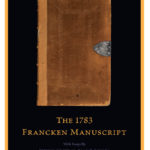 If you are interested in deepening your understanding of the early history of Freemasonry and its influence of Freemasonry throughout the United States and Europe, visit the library’s reading room to browse our recent acquisitions shelf.

The 1783 Francken Manuscript is a foundational document of Freemasonry and Scottish Rite that is of notable interest of Masons and historians alike. This volume features essays by, Alan E. Foulds, Aimee E. Newell, and Jeffrey Croteau, 316 full-color images of the original manuscript accompanied by a printed transcription on the adjacent page. While the book does not cover modern ritual this volume enables the reader to develop an understanding of the type of ritual they may have encountered during the genesis of Freemasonry in the United States.

This book features eight scholarly essays exploring various aspects of Freemasonry during the early eighteenth century including, early masonic lectures, the role of music and song in Lodge Meetings, speculation regarding religion, and an examination into early lodge culture.  Thus, this compilation of essays helps to understand the begins of the institution of Freemasonry as well as the societal impact of the craft.

Little Lodges on the Prairie

A study of religious organizations, Freemasonry, fraternal organizations, and social groups provides insight into the role gender played in the evolution of separate social spheres throughout Europe.

The Spirit of Freemasonry

Over twelve independent chapters translated from the original French documents pictured parallel to the type set translation explore Masonic subjects that may be viewed as peculiar to the 21st-century reader.    In addition to the main text, the footnotes provide readers with a  guide to understand the vocabulary, symbols, calendar, rituals, and alphabet utilized throughout Freemasonry.

Expanding on his Guide to The Exploration of Freemasonry Through Contemplative Practices, C.R. Dunning Jr. provides a practical and accessible resource for Masons interested in deepening their self-knowledge through the degrees of Craft Masonry.

Renowned Masonic researcher, Alain De Keghel examines the rise of Freemasonry in the United States during the Colonial Era by exploring the relationship between Marquis de Lafayette, George Washington, and Benjamin Franklin and the influence French lodges had on American Freemasonry. Moreover, Keghel investigates the decrease in membership and the efforts being made by the Grand Lodge of California to revitalize membership.

Translated from the original French, this Oussayef’s translation provides insight into the history of Freemasonry in the West Indies during the Late-18th and early 19th Century with documents from Lodge le Choix des Hommes located in San Domingo.

To commemorate the 200th anniversary of the Scottish Rite Northern Masonic Jurisdiction staff members, Richard B. Burgess, Jeffrey Croteau, Alan E. Foulds, Aimee E. Newell, Jerry A. Roach Jr., and Catherine C. Swanson compiled six chapters with lavish illustrations and prose that presents the history of the events, traditions, meeting places, and members which have encouraged the development of the organization from its beginnings to the present day.