The Grand Lodge Library and Museum has received the Memorial Box time capsule that was once sealed within the cornerstone of the Isaac R. Stewart Memorial Wing at the Masonic Home.

The new hospital wing was erected to increase the hospital capacities for those in need, and it was made possible by Brother Isaac R. Stewart’s contribution. On St. John’s Day, June 22nd, 1963, the Memorial Box was presented by the Grand Treasurer RW Walter Dobler before it was sealed within the cornerstone laid by the Grand Master MW Harry Ostrov. The wing was finished and dedicated on November 23rd, 1963.

When the Isaac R. Stewart Memorial Wing was renovated, the time capsule was uncovered and unsealed at the dedication of the American Orchid Lodge Room at Masonic Care New Rochelle by Grand Master MW William M. Sardone on September 27th, 2021.

The box contained various documents such as: the Grand Lodge of New York’s Proceedings for 1962, a program of the cornerstone laying ceremony, a letter from the Grand Master, Empire State Mason magazines, an annual report, an issue of the Utica Daily Press newspaper and photographs. The by-laws and annual report of Oswegatchie Lodge No. 687 were also included in the box, as Brother Isaac R. Stewart, whom the building wing was named after was a member of this lodge.

The letter from the Grand Master MW Harry Ostrov address to the future brethren can be read as follows: 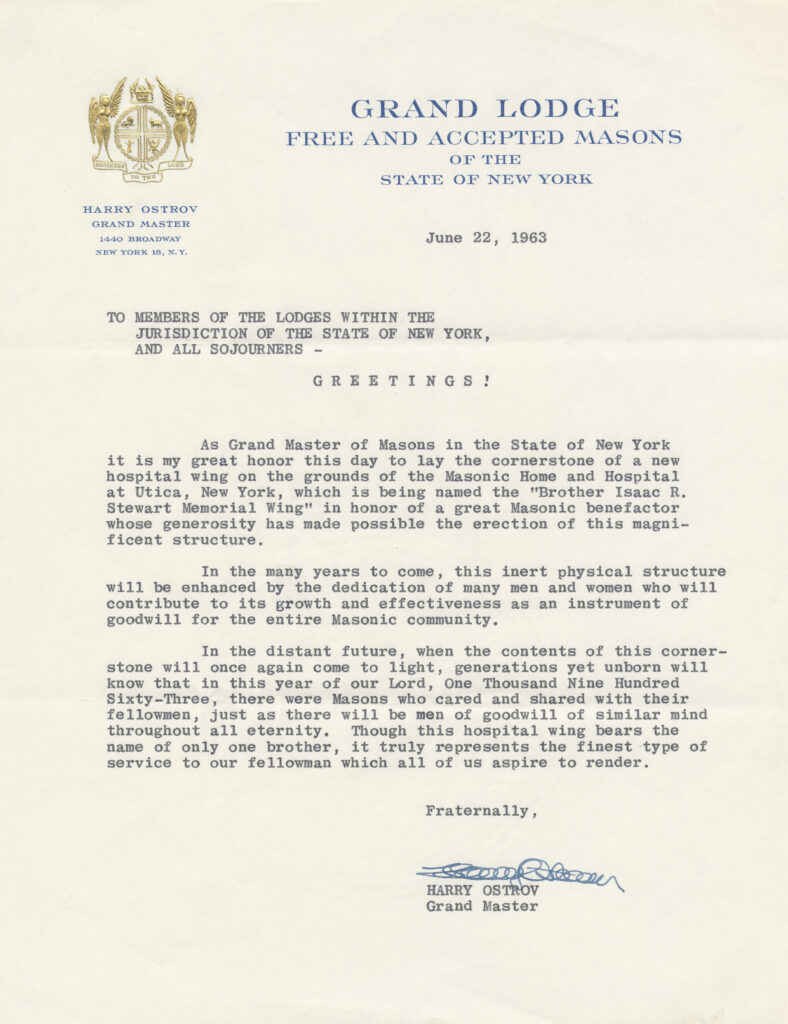 Proceedings of the Grand Lodge of Free and Accepted Masons of the State of New York. 1964.

Ceremony of Laying the Cornerstone of the Isaac R. Stewart Memorial Wing at the Masonic Home, 1963.