Lecture No. 4: Wisdom, Strength and Beauty 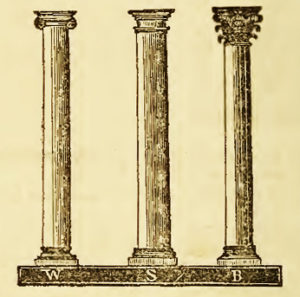 The Livingston Masonic Library will be hosting Brother Patrick OShea, who will present a lecture titled: Wisdom, Strength and Beauty. This lecture was prepared with the public and with the newly-raised Mason in mind. In it, Brother OShea has borrowed heavily from the likes of famous Masonic historians and writers such as Carl H. Claudy, Albert Pike, Albert Mackey and Manley P. Hall, along with the unknowns who have given us the legends of various gods and goddesses.

Anyone interested in Masonry, whether a Brother Mason or not, has heard many statements regarding the Fraternity that, for the mot part, are left hanging in the air to be accepted without further discussion. Not long ago, a newly-raised Mason asked Brother OShea to explain statements referenced by many a Masonic author regarding Masonry’s connection to the Mystery Schools and the Roman Collegiums.

Wisdom, Strength and Beauty is not intended to be an all-encompassing, scholarly lecture, but, rather, a comfortable discussion with some reasonable explanations.

WISDOM will touch on the various Mystery Schools, their methods of transmitting knowledge, and the “resurrected gods.”

STRENGTH will look at the Roman Collegiums and how they spread throughout the Empire with their Legions. Their legal status and structure will be compared to the structure of Freeemasonry, along with several well-established theories on how they may have survived the fall of the Empire.

Finally, in BEAUTY, he will extol the virtue and benefit of Brothers dwelling together in unity, with a focus on Charity. Here, Brother OShea will speak briefly on the work of the Grand Masters of New York and New Jersey.

The hope is that the lecture attendees will find an easily-followed timeline, with recognizable events and theories along the way, from which they can start their own research. Brother Patrick OShea is currently the Junior Warden in Euclid Lodge No. 136, Grand Lodge of New Jersey. He is also a 32nd Degree Mason in the Ancient Accepted Scottish Rite. His interest in the Masonic legends began in 1982, as many of his fellow NYC Police Department coworkers were members of the Masonic Fraternity. At that time, he was involved with another esoteric society which seemed to have much in common with Masonic ideals, if not Masonic legends.

That personal history, combined with the theory of Joseph Campbell’s that myth, legend and allegory are to a large degree responsible for the moral direction of societies, catapulted Brother OShea on a trajectory to examine the oldest and noblest Fraternity in the world. For the past 37 years, he has studied and examined the Masonic morality expressed in allegorical form, along with the accompanying sybols.

Upon retiring from the Police Department over 20 years ago, he became a gemologist working in the Diamond District in New York City, where he and another Brother Mason and historian make, repair and restore antique Masonic jewels from around the country.